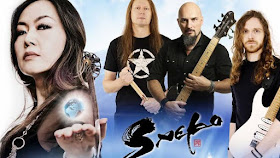 Saeko Kitamae is one of those artists we can call a warrior who makes music with her heart. Since starting the search for her dream of having a metal band, initially with bands and projects in the Japanese scene, and then left for Germany. (versão em português)

In 2002, while she was on the streets of Hamburg distributing flyers looking for musicians to form a band, caught the attention of Lars Ratz (Metalium), who was impressed by the attitude of that young woman. From there, a great partnership emerged, with Lars producing the first albums. The debut had good repercussion, including with Saeko going to play at Wacken.

But due to several setbacks, shortly after the release of the second album, "Life" (2006), Saeko had to return to Japan and discontinue activities.

But the warrior did not give up, and in 2020 it was time to return, and with the help of a crowdfunding campaign, she recorded a new album. Early 2021 the singer had another hit, the death of great friend Lars Ratz in an accident. It was time to gather even more strength and focus on the new work, "Holy Are We Alone", released last month on the Pride & Joy label.

We have talked to Saeko, who open-heartedly told us about his career, the victories, the disappointments, and of course the new album, which brings a connection with the previous ones, and has a beautiful concept. Check out!

RtM: You've been in the Metal scene for a long time, facing ups and downs and even moving away from the stages and studios, but always gathering strength and coming back. Tell us more about this comeback and about this new album, which also featured a crowdfunding campaign.
Saeko: First of all, thank you for still remembering me after so many years. Maybe I can later explain as the answers to other questions about what happened and how suffering those years were for me, but for now, I'm very happy that I was able to come back with a great album. This comeback was possible thanks to backers of the crowdfunding campaign and to supportive journalists like you.
Also, the great musicians who trusted me and helped me with no guarantee (Guido Benedetti, Michael Ehré, Alessandro Sala and V. Santura). I'm very thankful to all of these people. 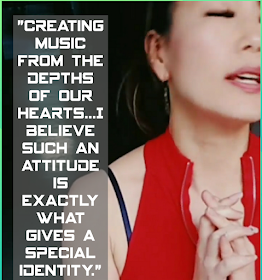 RtM: And why did you go so long without releasing anything new? After realizing dreams like playing at a festival like Wacken, receiving a good response from critics and audiences with your previous albums, you ended up suspending activities.
Saeko: To make it short, a few things happened businesswise in Germany and I couldn't figure it out myself in those days (2006), so there was no way but to stop my music activity. When I stopped my music activity, my residence permit expired (I was allowed to stay in Germany only on the condition that I work for a German production/label). So I had to fly back to Japan. But in Japan, no Japanese lawyer knew how to rescue me from what happened outside of Japan. So, besides music, bureaucratic and legal matters ... Many hurdles were there to get over.
RtM: Oh, So many bureaucratic things. And then?
Saeko: Since all Japanese lawyers threw away my matters, I studied and analysed by myself. It took me more than 10 years to figure out the reasons and to solve the matters. Anyway, I'm happy that I finally made a comeback at least. By the way, the hardest battle I had this time (2019) was also with the German Foreign Department.
I had to turn in so many letters, certificates, and a thick business plan to convince them to get a residence permit. It's understandable, though. If a foreigner visits the immigration and says, "I wanna stay in Germany to make heavy metal" ... I assume most officials would be like "wtf", haha. Anyway, I'm at the starting line now, and let's see how things will develop. Life taught me a lesson. Now I´m gonna face the future.
RtM: What are your expectations for this new phase with the band?
Saeko: Before COVID, my plan was 1. make the album, 2. find a booking agency and 3. go on tour. Yet, COVID changed my plan ... it's opening up again, but I haven't found a booking agency yet. For the moment, we're planning to make some more lyric videos, while looking for a booking agency. It's a strange time, but I love playing live shows. I actually wanna play in Brazil one day, as I get lots of fan messages from Brazil.
Anyway, nothing is possible by myself, but many things became possible together with people who support me and my dream. So, I hope to make it come true again. Anyway, if there's any good booking agency reading this interview, please contact me. 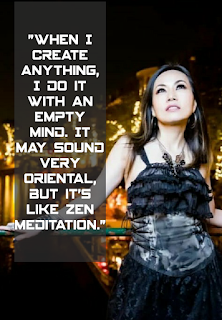 RtM: Tell us about the concept of this new album, the release says it would also have a connection with the first two albums.
Saeko: Yes. Of course, the concept has connections with these two albums as I'm always writing about the same theme, the eternal truth of our spirits. In fact, lyrically, there are several deep stories going on simultaneously, but this interview is too short to explain everything.
Still, I can point out a few interesting hints here. For example, my 1st album (2004) was titled "Above Heaven Below Heaven". Combined with the title of the coming album, it becomes "Above Heaven Below Heaven, Holy Are We Alone".
Non-Asian people may not recognise, but someone from Asia will surely notice that this is an alteration of the famous phrase by Bhudda: "Above Heaven Below Heaven, Holy Am I Alone". Also, listeners who heard my 2nd album "Life" will notice that the opening of the coming album is an alteration of the ending of the 2nd album, which finished predicting my death and rebirth:
"Don't cry, soon I will meet you again, please remember me ...". And the coming album starts: "Now the time has come, I'll be back, To meet you again"
This opening suggests the story is continuing. But it's also the voice of SAEKO to long-time fans, you know, to say SAEKO is finally back to you.
RtM: Very nice! I have noticed the connection on the intro of the new album
Saeko: Anyway, 1st, 2nd, and the coming 3rd albums are made on the same theme.
The 1st album was METAPHYSICAL, which described the eternal truth in the OTHER WORLD. The 2nd album was PHYSICAL, which described the
personal truth in THIS WORLD, based on my real life. ... and the new album reveals how these two different worlds make the universe together.
RtM: "Holy Are We Alone" brings lyrics in several languages, and also elements of Japanese culture, some differences in the sound of the band, which even received praise on previous albums for presenting a very own identity. Tell us more about these differences.
Saeko: I have my philosophy: When I create anything--either writing lyrics or composing--, I do so from the empty mind. It may sound very Eastern, but it's like a Zen meditation. So, if there is anything you felt different from the earlier sound, it is the result of my creation and not what I did intentionally.
I also told this philosophy of mine to Guido Benedetti (g), who helped me compose, before working with him. Then, he said it's also his philosophy. So, I think we both succeeded in creating music, coming from the deepest of our hearts. And I believe such an attitude is exactly what gives a special identity to music.
RtM: And what "surprises" the public should find in this new album?
Saeko: What "surprises" should the public expect? Hmmm, a difficult question, for I didn't intend to surprise anyone, as I said above. But I myself got surprised by songs like "India: Farewell To You I", in which you hear the Bhuddihism chants in Sanskrit, and "Germany: Rebellion Mission", in which you hear me singing Mozart "Queen Of The Night Aria". 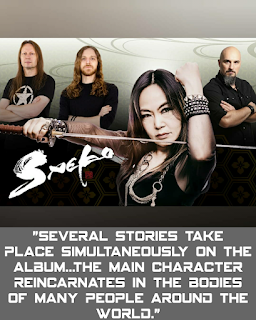 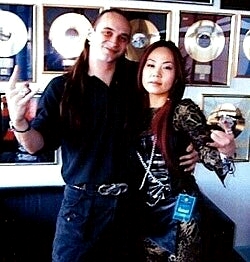 RtM: A great musician, so sad he passed away.
Saeko: He passed away by accident in April this year. Just about a month before his death, he, I and V.Santura talked again, to have him as a guest in my coming album, to sing some male choirs again. He was happy to hear my coming back and recorded his choirs.
It was quite fun that I was even thinking of asking him to record my vocals in the future again. Coz he's the best for me as a vocal producer. Then, just after that, he departed this world. I felt shocked, for I'm probably the one who recorded his last performance. Do you understand what it means? I felt a kind of destiny.
Anyway, he and I made great music together. We were free, passionate and bold idealists. I'm sure I'll meet him again in my next life. It's strange that I feel so sure. 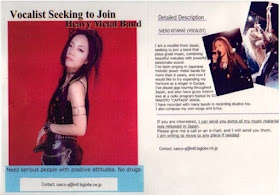 RtM: What about the "Life" album? Some things again weren't going as you expected? Tell us a little about this album too.
Saeko: No, it's just because I had to fly back to Japan as I explained above. Also, I used up all my money, and it was really hard for me to survive the next day. If I remember correctly, I started to have job interviews one month after the release, for I really had to survive anyhow. With no money for tomorrow at hand, I was very depressed, then I got fan messages from South America, saying "Please come to play in my country". I was like, "Yes, I would like to! But I have no money for that!"
RtM: What about plans after the release of "Holy Are We Alone"? As soon as possible, are there already contacts for concerts?
Saeko: I hope to set up some shows, so I need to find a good booking agency to help me. Unfortunately, I cannot set up all these things by myself. But, of course, I don't wanna finish just releasing an album, like the last time. So, please wish me luck to find a good agency this time and make it. 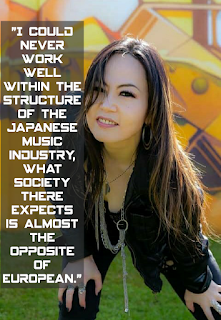 RtM: Thanks for the interview, we hope the new album has a great reception, quality for what we know it has!
Saeko: Thank you very much from me, too. People like you are supporting my music. Really, I appreciate it.
Interview by Carlos Garcia
Saeko Official Site
Saeko Instagram
Saeko Spotify
Carlos Caco Garcia às 06:35:00
Compartilhar